It's a Book
Written by Lane Smith. Illustrated by Lane Smith.
Roaring Brook Press (2010)
SUMMARY: Playful and lighthearted with a subversive twist that is signature Lane Smith, this book is a delightful manifesto on behalf of print in the digital age.
NOTE: The narrative is composed of dialogue between a mouse, a jackass, and a monkey about a book. 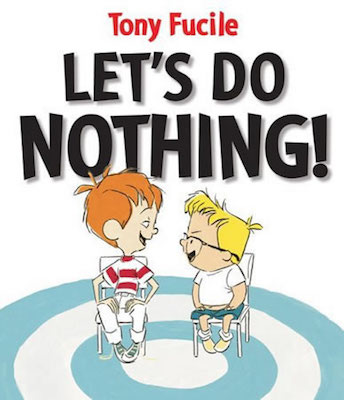 Let's Do Nothing
Written by Tony Fucile. Illustrated by Tony Fucile.
Candlewick Press (2009)
SUMMARY: Frankie and Sal have already played every sport and board game invented, baked and eaten batches of cookies, and painted a zillion pictures. What’s left to do? Nothing! Ten seconds of nothing! Can they do it? Can they act like stone statues in the park?
NOTE: The narrative is composed of dialogue between Frankie and Sal, two bored friends, who actually find something to do while doing nothing.
Page 11 of 18