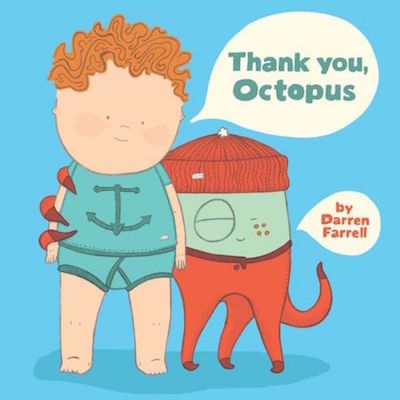 Thank You, Octopus
Written by Darren Farrell. Illustrated by Darren Farrell.
Dial Books (2014)
SUMMARY: Ahoy. It's bedtime, and Octopus is here to help his buddy get ready. First up is a bath ... in egg salad? Then it’s time to brush teeth with paint brushes? And don't worry, Octopus made sure there were no monsters under the bed because they’re all in the
NOTE: The narrative is composed of dialogue between a boy and octopus.

That is Not a Good Idea
Written by Mo Willems. Illustrated by Mo Willems.
HarperCollins (2013)
SUMMARY: One day, a very hungry fox meets a very plump goose. A dinner invitation is offered. Will dinner go as planned? Or do the dinner plans involve a secret ingredient.
NOTE: The narrative is composed of dialogue shown on intertitles. In silent movies, an intertitle was a frame (usually black) with explanatory text or dialogue.
Page 15 of 18