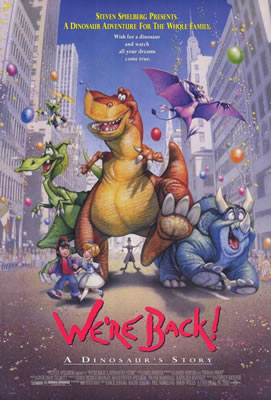 Summary: Captain New Eyes travels back in time and feeds dinosaurs his Brain Grain cereal, which makes them intelligent and non-violent. They agree to go to the Middle Future (our era) in order to grant the wishes of children in New York city. They are to meet Dr. Bleeb of the Museum of Natural History, but get sidetracked with their new children friends and run into the Captain's evil brother, Professor Screw Eyes, who has other plans for the dinosaurs.
Starring: John Goodman, Rhea Perlman, Jay Leno, Yeardley Smith, Martin Short
Directed by: Phil Nibbelink
Release date: November 24, 1993
Running time: 64 minutes
MPAA Rating: G
Tagline: A dinosaur adventure for the whole family.
Production: IMDb Details
Based on: We're Back: A Dinosaur's Story (1987) by Hudson Talbott
Watch the trailer
Page 26 of 28